Would you like to switch to the accessible version of this site?

Don't need the accessible version of this site?

You can receive $1.00 off the normal daily boarding fee if your pet was vaccinated at our hospital within one year of their reservation date! 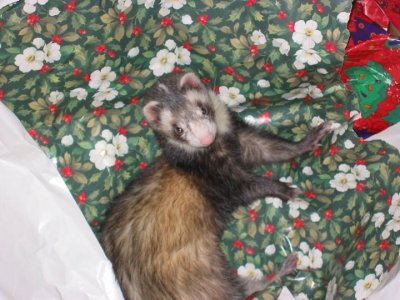 Adrenal disease in ferrets is generated by a tumor that forms on the adrenal gland. Usually, this tumor is found in ferrets beginning at age four. (Normal lifespan is five to seven years.) The only way to determine whether a tumor is malignant or benign is with a biopsy. Regardless of the type of tumor, problems begin when the growth forms on an inner layer of the adrenal gland responsible for hormone production. The adrenal tumor causes the gland to increase hormone production, which can create a number of serious issues.

Symptoms of adrenal disease include itchy skin, weight loss, behavioral changes, aggression, and thinning hair on lower back, tail, and eventually the entire body. Also, the prostate in males can swell, causing urinary obstruction. Internally, bone marrow suppression and a decrease in blood cell counts make the ferret much more susceptible to infections.

Surgery can be performed to remove the affected adrenal gland. However, there is a very high probability that another tumor will appear on the second adrenal gland, usually within one year of surgery. There are serious risks linked to surgery. For example, the adrenals are very closely associated with major arteries and veins. Also, some ferrets can already be sick at time of diagnosis and may not be good candidates for surgery.

Many veterinarians and owners opt to treat with medication. There are some daily medications available that stop or block the effects of hormone production. The tumor, unfortunately, will not go away, and will continue to grow. Often, the medicine will lose it’s effectiveness, at which point another avenue of therapy may need to be discussed.

Newer treatments include monthly injections of a hormone suppressant called Lupron or a melatonin implant given every four months that would negate the need for daily medications.

There are several ways to diagnose adrenal disease in ferrets. A blood sample can be sent to an outside laboratory to run a panel, looking for an increase in hormones like estrogen, progesterone, and estradiol. A less comprehensive test can be run in hospital to look for increases in alkaline phosphate levels and decreases in blood count levels.

We look forward to hearing from you

Find us on the map